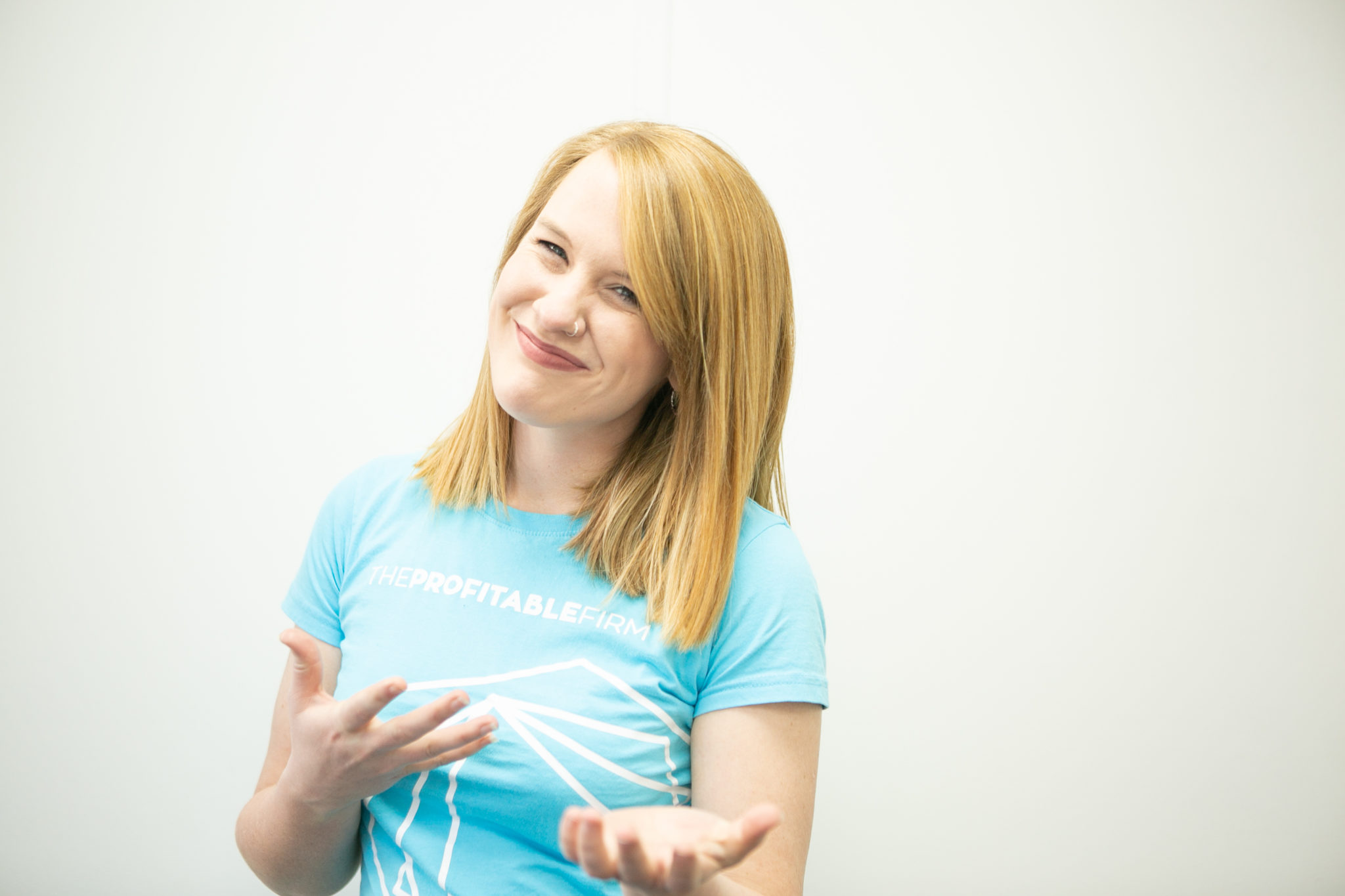 Let’s say you’ve made really good progress in understanding your own worth, and value.

You’ve addressed the services you offer, and what you charge for them – and maybe even your entire brand, too. Whether you’ve literally rebranded, with a new name or logo or identity, or are just doing the hard work that sits behind it, you’re building confidence every step of the way.

You’ve reassessed your pricing. You’re charging what you’re worth. You loaded it all up in your proposal tool and held an amazing meeting and were actually pretty proud of your own self.

And then they said,

“What? That is SO expensive. How can you be so expensive? I’m not paying that – no way!”

They phrase it in all kinds of ways, and sometimes it’s more subtle, like “I’m not sure, let me think about it, I’ll come back to you” and then they don’t…but it’s the direct attack which can be the most disconcerting.

How do you not take that personally?

How do you stay one hundred percent confident in your own value and pricing, when someone is so sure it’s not good pricing, not worth it, and they’re even direct enough to tell it to you straight out?

Now, I’m talking to those of you who aren’t 100% of the way there yet. Some people are – they’re completely confident, they have no qualms, and if prospects question their pricing, they don’t mind because that prospect can go elsewhere. That’s grand, and it’s good they’ve gotten there.

But if you haven’t, not quite yet, that’s okay too – because it’s a process. It takes time.

Recognise this is a complete rewiring process

This is a process of rewiring old, bad thinking.

Like all rewiring projects, the difficulty of the rewiring depends on the mess of the wires already there.

I’ve been there too. I used to work in an accountancy firm myself, and although I learned a great deal of very good business skills, I also learned some bad habits. And one of those was that they always, ALWAYS discounted prices if it was a “good potential client” or they were impressed with the business in some way.

It was like the client was always right, and we needed to take care of the client, and actually the pricing was kind of thrown together anyway so it was okay to change it.

And if they didn’t accept it, and said it was ridiculously high and the other accountants who quoted them were much lower, or it was not a good price for the work that would be done… we believed them.

We thought if someone didn’t like our price they were right and we were wrong. That we had to discount because we’d lose the business otherwise. That it was our responsibility to accept every single prospect who ever enquired.

That’s all not true, but the rewiring took years.

I had to first recognise how destructive that sort of thinking is, and how it’s a bizarre twist of truth and lies.

The truth is, you do want to serve the client well. You want to care for them and deal well with them and honour their use of money and help them have the best business ever.

The lie is, reducing your prices to make them happy will do that.

It won’t – not ever. They’ll be temporarily happy, and then think, “Wait…they reduced the prices because I asked or questioned its value…so IS it valuable? Even at this price?”

It’s like those companies who discount things when you ask to cancel, so you ask to cancel knowing fine well they’ll offer a discount, but they wouldn’t do it otherwise. They’re rewarding bad behaviour – encouraging fake cancellations. You don’t like it and don’t respect it: and neither will any of your clients.

So you know it’s not healthy or good business behaviour. You are, deep down, confident in your value and the pricing associated with it. But every once in a while there’s a little buzzing glitch when a prospect questions you, and all the lights go out, and you feel discouraged and confused.

That’s okay. It’s completely normal to have the little glitch. It’s what you do with it that matters.

Even once you know the truth – that business is personal, but pricing doesn’t have to be – it takes time.

Just because you’ve worked hard to know where the pricing comes from and thereby the value, and you have a good process…. it doesn’t change your thinking overnight.

Even once you change your behaviour, you’re still left with the emotional remnants of people pleasing, and it takes a lot of practice to move past that. To cheerfully and pleasantly say, “no problem! Hope it goes well for you”, and mean it, and be confident we have a good process they just didn’t like. That’s because we care.

You take it personally because you care.

If you didn’t care at all – if you genuinely (not as a defence mechanism) went round saying WHATEVER I’M AWESOME YOU SUCK… you may have some arrogance issues going on.

But for those who care, that’s a big part of the issue.

Boundaries are in place to protect. They protect both you AND others.

You wouldn’t do it with your children – you care for them, but you don’t allow them to do every single thing they want, eat everything they want, sleep whenever they want. (Okay maybe it’s a little more like that at the moment, but even still. There’s always a line, even if it has some fluidity.)

And it’s the most caring thing in the world to say no. To show where the boundaries are, and why, and working through it together.

So it’s a good thing you care. The heart of taking it personally means you have a heart that cares, and that’s a good quality.

But this rewiring process involves recognising (and I have to work on this too) it’s 100% okay if everyone doesn’t like me.

Let that sink in for a second.

It is one. Hundred. Percent. Okay. If people don’t like you.

Naturally you want clients to like and respect you, and I can’t imagine why you’d keep on clients who don’t actually like you (or vice versa).

But for the prospects (or others), it’s okay if they don’t like you.

Don’t want to work with you.

Don’t agree with you.

It’s NOT okay if they don’t understand, or are confused, or you left them hanging. That’s your responsibility.

Neither you nor I can change anyone’s mind and we’re not supposed to. That’s not our job.

You’re only responsible for…

…so the ones who think along the lines you do will come when they’re ready.

They’ll value you (and your services, and your pricing, and everything that makes up “you” and your firm), and although they have a few questions or aren’t quite sure at first or need to think about it, they’ll realise you are the accountant for them, and they’ll sign up cheerfully and with enthusiasm for where this relationship will go.

Some will come, test the waters and leave.

Some will be angry the water isn’t the temperature they expected.

Some will be scared.

Some have had a bad experience (or two or three) and are suspicious.

Some won’t come at all.

That’s entirely okay – that’s their battle. All we are responsible for is our own. And doing everything possible to serve honestly and with heart. Whoever likes it is our people. Whenever doesn’t…. isn’t.

Business is personal, but pricing doesn’t have to be

People do business with people. This has always been true. And we don’t divide pricing from people as if they aren’t integrated at all…but we can explain pricing in such a way that the decision to work with you is a whole-business one. Not simply a pricing one.

Because of this, your pricing does need to be explained – but not on its own. Not as a separate fact on which they make their decision: but one part of the whole.

And this is where pricing needs to be integrated into every part of what you do to welcome prospects.

Good marketing is meant to divide. To cause the people who like your way of thinking to come and engage with you and start a conversation. And to cause those who don’t, to leave. To go away. To say no thanks.

Ideally, good marketing will do that before they ever get in touch. Before they ask for a proposal or have a meeting or even send an email.

Sometimes, the reason you’re getting (even a few) prospects who are questioning your prices is because they don’t have enough information first.

We all know (from personal experience) that the budget in our head can get wiped out when we have new information. We thought we’d only spend a few hundred quid, or dollars, and then we learn more and decide to spend thousands – because we trust, and we understand, and they’re our people, and we’re ready.

Remember the Google statistic that your buyer makes 70% of their buying decision before they ever get in touch.

That includes whether they were referred, their visit to your website and social media channels, videos they watched, content you created which they consumed.

And the less content you have to answer 70% of their questions, the more unclear they will be as to whether you’re their kind of person.

If your website is all “we are modern forward thinking friendly accountants who will help you achieve your business and personal goals”….well, thousands of accountancy firm websites say that.

Your prospect has no idea whether that’s actually true.

If your pricing page has a few “packages” (which confuse them because they don’t want a pre-prepared package which suits most people, they want something which includes ONLY the services they need and want – and nothing else. You still need to address pricing, but you do so in a way which gives them confidence and clarity about how that pricing will be determined.

Your website is the primary means of helping to divide (and thereby conquer!) prospects. This all applies to social media, and content and video and all of those engines – but at a minimum, your website needs to:

Once you’ve done all of those things on your website, your marketing will divide. Which is its job.

You’ll start getting not only better prospects, but eventually you’ll ONLY get prospects of the kind you want.

(From time to time you’ll still get a few iffy ones, but the connection will be swift, and they’ll go elsewhere quickly.)

No hard feelings, nothing to take personally. Just you, doing great work, with excited clients who value what you do and are ready to pay for it.