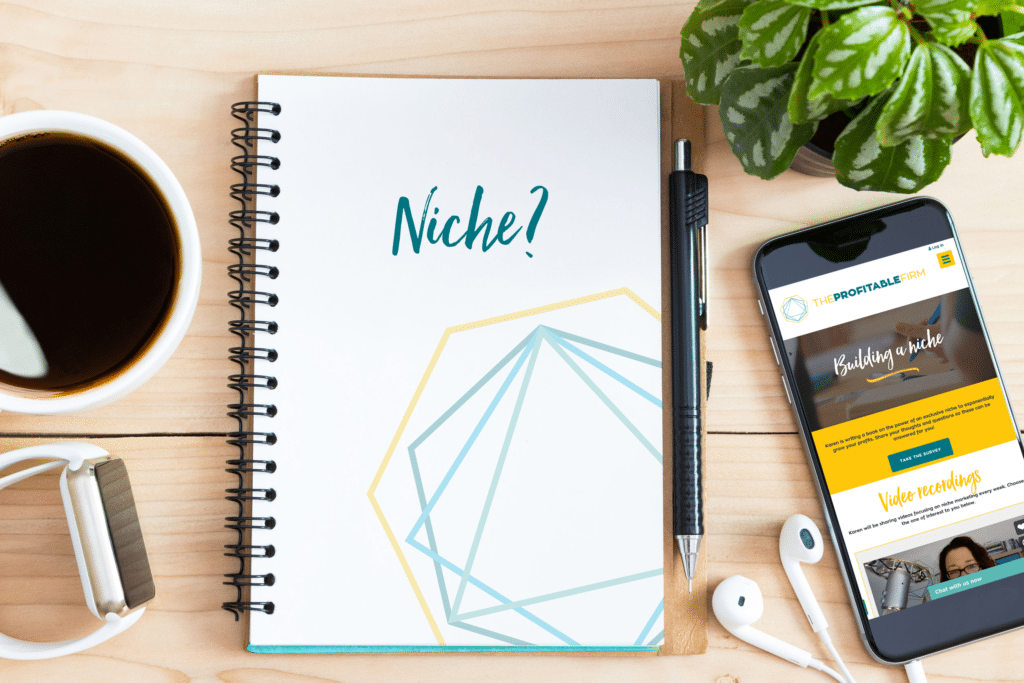 Considering whether you can focus on a niche for your accountancy firm marketing can be confusing and even a little frightening.

Where do you start?

What if you lose business by picking a niche?

What if you invest in niching and then discover it was wasted?

You might think I wouldn’t know how this feels. After all, I’ve not only niched, but have done so exclusively for over six years. My company works only with accountants, and never has worked with anyone else. I’ve worked in that sector and industry for many years before that. So it can be tough to get out of my own head and experience, and think about things from your perspective.

This month, I got a little glimpse of how hard it can be, to consider a niche.

I signed up for a 90 day content marketing challenge starting in January.

The idea is that you pick something you’re committing to do (such as blogging every week or recording a new video once a day), and you do it.

By the end of the 90 days you have achieved your own challenge and you are thrilled and proud and you win your own little personal trophy. (At least in your mind.)

The challenge I set myself was to write one blog per week on niching and embed a video in each post (either record a new one, or embed one I’ve already done on that topic).

It’s now a full 30 days into the challenge, and I haven’t done one.

Not one blog, not one new video.

I am one of the most competitive people I know. When I set challenges, am given deadlines, promise I will do something, I do it. Even if the challenge is only against myself I’m ruthless with my own self. If it’s against others, the pressure increases.

It’s not that I didn’t try.

The idea behind this challenge was that I’d like to write a book on the power of niche. So I started an outline in a Google doc and started bringing in everything I’ve ever thought about on niches. Questions I’ve been asked. Blog post ideas. Topics. People who’ve tried niching and failed. Opportunities.

But every time I picked something from the outline and tried to write about it, I got completely stuck. I’d type for a little while, then back up. Move things around. Start, and start over. Give up, and come back to it.

I basically spent a month adding words and deleting words to a document.

It wasn’t that I didn’t know what to write about.

I believe in the power of niche. I’ve had a reasonable level of success doing it. I talk to everyone about it. People are often fascinated by my exclusive niche (not only that I have one, but that it’s with accountants). I’m even more passionate about it for accountants, because competition and opportunities are both so high for you. Niching is absolutely the number one way to truly stand out.

But the blogs didn’t get written.

Finally, I did what we all have to do when we are brought to our most frustrated place: I humbled myself and asked for help.

The person I went to was Chris Marr, who is my co-speaker on our Marketing Masterclass for Accountants. (If you haven’t signed up yet, do it now.)

Chris owns the Content Marketing Academy community, which is something I’ve been part of for almost two years.

Chris knows the mental blocks associated with content marketing. He deals with these blocks himself and advises people daily on how to address them. He has the remarkable combination of being both direct, and kind. He won’t faff about, but he’s not harsh either. And for some bizarre reason he seems to like me and think well of me, which is a big deal when you’re asking for help. His faith in me is far stronger than my faith in myself.

I told Chris my frustrations, my confusions, and my situation. And within about five minutes we’d nailed the reason I was hitting this mental block.

I wasn’t crystal clear about my audience.

I wasn’t sure if I was writing my blog posts to accountants, or writing them to business owners at large. After all, if I’m going to write a book one day, surely it will have more appeal if it’s written to a broader audience. And do I really know enough to write an entire book solely for accountants, on this topic of niche? Do I have enough case studies of accountants who have niched (much less exclusively niched) that I can share?

I hope you can see the block faster than I did. It’s so incredibly obvious.

I was not niching.

So why in the world would I not at least begin focusing my content on the power of niche to the very niche that I know best?

It seems almost ridiculous now that I think about it. But by the end of my call with Chris, I realised that this is an incredible opportunity for me to have new insights into how you as accountants feel when you begin to explore the idea of a niche.

It feels like you’re missing out on reaching more people.

You’re worried your expertise is more general, and focusing it will showcase what you don’t do as well, rather than what you do very well.

And most of all it stops you, like running into a wall, from actually moving forward with your marketing.

In my future posts on niche I’ll talk about how to find one. Whether it will work. If you can have more than one. What niche actually means. How it’s not necessarily an industry. What to do if it doesn’t work.

But for now you can start where I did, which is to check in with yourself about what (or who) you know best.

Think about things like the type of person, or audience, or business, or area, that you….

When you make that connection, the writing and the creating begin to come a lot more easily.