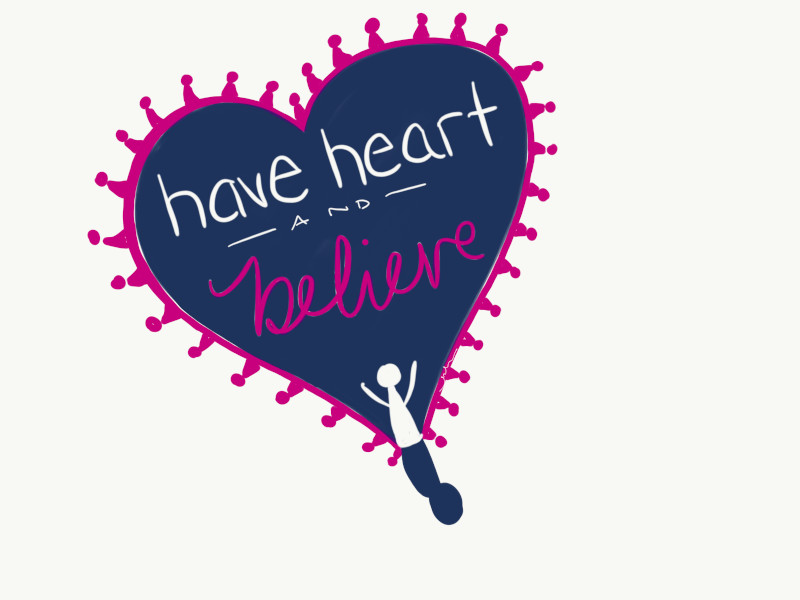 Last year I was asked to sketchnote the five values for a company called Diagnostax. I got to know them through one of the owners, Gwil, who I met at an accounting conference. I was walking through the hordes of people and Gwil literally stopped me and said “You’re Karen Reyburn, right? The one who does those great sketchnotes?”

I said yes (feeling like a celebrity), we chatted, and he showed me a sketchnote he’d saved on his phone because he liked it so much. Somehow we got talking about his company values, and I offered to sketch them out.

It turned into this whole project, and now their five values are all properly sketchnoted AND printed on canvases in their main office.

Sketchnoting values is fun. Seeing them printed and hanging on the wall is fun, too.

But it’s completely useless unless these values are actually lived out in real life. By every person at the company.

Sketchnoting anything as a paid project is quite a serious thing. I spent hours with their videos and emails and social posts, making notes, listening, reading, and seeing whether, and how, the team were living these values out.

One of their values is “Dance, have fun, enjoy the process”, and I saw they’re quick to record and send a new dance video to new clients, and post it on twitter.

Another value is “Be real; know yourself”, and I saw they’re willing to share bloopers and honest mistakes or funny things.

I really enjoyed the project: what I enjoyed even more was seeing they weren’t simply nice phrases. This was for real, and they want it to be for real. (“Be real: Know yourself!”)

I’ve thought a lot about values in the past year or two. And really, values are everything.

Values lead your decisions, because they make decisions easier.

If you don’t know what your values are, you can’t make good decisions. You’ll just decide based on how you feel at the time. Conversely, when you know your values and have documented them – and have visual representations of them to remind you in many ways – the chances are much, much higher you’ll live them out.

I’ve had to make some decisions in the past year or so I didn’t particularly like at the moment of making them. I felt sad, or confused, or conflicted, or frustrated. I wasn’t sure what the response would be from the person I had to communicate them to (and sometimes the response was…not very nice).

But I’m not responsible for others’ responses or reactions. For their decisions or feelings.

I’m only responsible for my decisions, and for my business those are based on predetermined values. (For my life they are based on personal values, which I’ll mention another time. There is a crossover, but I am not the sum total of my business or vice versa.)

We have four pillars at PF, and these came originally from things which are not only important to me personally, but support the kind of business I want to run.

Our four pillars are creativity, integrity, generosity, and rest.

I decided I didn’t want a high-speed, hustle-mentality business, the kind where people never stop working and never take a break or feel guilty when they do. And so Rest became one of our pillars. I wanted not only to deliver good creative work, but to help accountants believe they’re creative, too. Hence the Creativity pillar. I hate lying, and I hate being lied to. So the Integrity pillar stands. You get the idea.

I identified those pillars many years ago, back when the company was young. They’ve served us well, and we continue to use them as foundational reminders of what we stand for. But as the team has grown, it helps to have internal values defined. These go into more detail, and describe the way we do the creative work:

We know what we think, and are able to explain why

We look for the good, and believe there’s always a blessing.

We take ownership, and we strive to be better.

We are here to help, and will be patient and generous.

We come to solutions together, as a team

Since creating these values, we’ve had many long discussions as a team. We’ve changed the wording slightly on a few of them as we explored what they really mean. “Transparency”, for example, started out as ‘vulnerability’. We discussed how the word vulnerability can make some people feel nervous (and bring out negative or reminders of times of un-safety), so we changed it to reflect the point, which is sharing what needs to be shared, at the right time, so we’re all closer.

We’ve used these values for daily conversations. For hiring and firing (of team members and clients). For figuring out how to word an email, or what kind of gift to send and when. In team meetings and at team retreats and whether to ring this person or not.

And for all these things, having values makes decisions easier.

Hiring is a really good example. I see so many business owners who simply go with their gut. They say “they seem nice” or “the interview went well” or worst of all “I really need to hire someone so we’ll just give it a try”.

But when you have defined values you and the whole team agree to, you don’t go with your gut alone. You build a process based on values, and then the process proves your gut – or proves it wrong! I have a few stories of my gut insisting this person was perfect, only to find out later they weren’t, so much. And conversely I’ve had a few times of wondering which direction this would go, but trusting the values and the process to bring out the best: and seeing that work brilliantly well.

There’s not a single client I’ve worked with who had absolutely no values. Or didn’t know what they were. Everyone has values: the problem is, we haven’t always taken the time to explore them, figure out what we want them to be, document and tweak them, and work on living them out in the small decisions of life.

When we go through a workshop with a firm, or discuss it in our group coaching sessions, the values come out.

People start with vague words like “value” and “learning”, and by the end are saying things like “mutual respect” and “embrace what you’re good at”. They’re similar, but the final value is theirs. It belongs to them, and no one else. Everyone wants to learn. Not everyone has the core value of embracing what you’re good at.

The more specific the values, the better.

And they must be documented. They must be written, memorised, and shared everywhere – so you can check your team against them, and yourself, and vice versa.

(Note – There are workshops and processes you can follow to determine your company values and your personal values – if you want some direction on that, drop me a line.)

Values cannot simply be documented. They must be lived out (from the heart).

Documenting values is a great start. But how many of us have seen some ‘values’ listed on a wall or on a web page and rolled our eyes and thought “right…they did a little values exercise and stuck those on there”.

The values are worthless if they are…

…only known and lived out by the owner/leaders.

If you as the owner of a business know what your values are and you live them out, but your team doesn’t, they’re not company values. They’re just your values.

…not written down and quotable by everyone.

If you say you all know your values, but they aren’t written down and memorised, then it’s still too vague. When people aren’t clear on the values, they aren’t using the same language. So their actions can’t be checked against them.

…commanded by the leader(s), not worked out together with the team.

If you merely create and document values, and tell the team that’s what they are and that’s what we need to do, they’ll follow them – sort of. With their actions and head, but not necessarily their heart.

Values must be lived out from the heart. That’s why they’re values – not rules and laws.

Laws are very, very specific. Do this little thing by this date or there is this penalty to pay. Okay, I will do the thing whether I feel like it or not, and if I miss the date I pay the penalty.

When you’re going…let’s say really fast… on the motorway, and the sign says 70, you don’t slow down simply because, from your heart, you have this deep desire to drive safely and honour the other drivers and protect the land on which you’re driving. That’s a nice idea, but we don’t do that. We slow down (especially when we see the little camera image or the car with lights at the side of the road) because we know the law says if we don’t, we’ll get a ticket which will cost us money. And maybe points on our license. And maybe restrictions on being able to drive when and where we want.

Laws are good, and we need them for areas of safety and protection and justice.

They give direction, but more of a broad direction. Like instead of a Google Maps step by step, the direction just says “we travel by the path”. You get to choose which path and how long and how slowly or quickly you go.

Values don’t give every single tiny little detail: they give direction. And that direction forces you to make a decision. It creates a crossroads.

When you come to decision time (of any kind), values need to be specific enough that they force you to make a decision.

Do you go or stay? Are you in or out? Does this person fit or not? Check the values and then decide.

Some people will agree to values in principle, but when a conflict arises, they will then be forced to make a decision between your company values and their preferences or personal values. Then they have to make a choice.

Everyone has to make choices.

But if the choice goes against the agreed upon values, there will be consequences. Some kind of action will happen, or the person may need to leave the company (as a team member or client or supplier or whatever the relationship is).

And that’s okay, too.

You have to be okay with letting people make their own choice. What’s not okay is leaving it vague as to the basis of that choice – at least for you, and for your company.

How do you react when you get a new lead? 1. Yay! (but then discover they aren't right for you) 2. No thank you 3. More?! I have too many Sound familiar? Join our coaching session to learn how to better qualify your leads so you only take on the clients you love to work with!