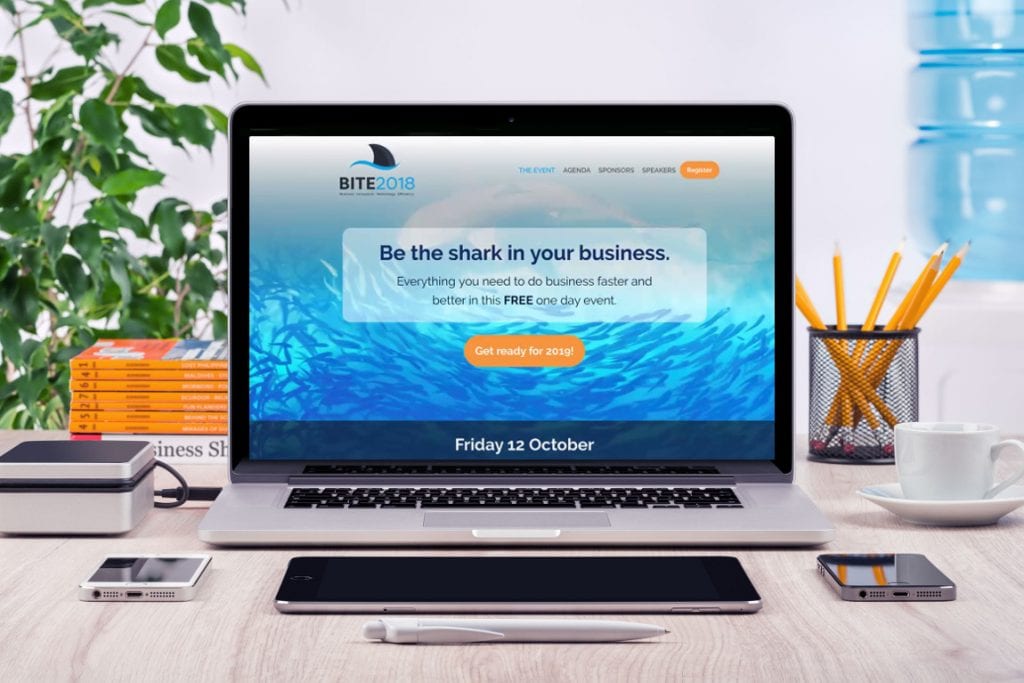 Have you ever considered running a major event for your accountancy firm? Saint & Co, based in Carlisle, recently delivered a mini-Xerocon style event with over 200 registrants and 150 attendees.

How did they do it?

In 2017, Andrew Liddle, partner at Saint & Co, attended Xerocon London. He saw the impact of the event on him and the others from Saint & Co who attended – and he knew there were more of their 2500 clients who could be using Xero (but weren’t). How to get them enthused and excited? How to show them what was possible? Andrew looked around at Xerocon and suddenly thought, “What if we did something like this – on a smaller scale – in Carlisle?”

It would be a big undertaking, and Andrew knew it. He spoke to Karen and the PF team at their exhibition stand, and asked if this was possible. We knew it was possible, because another firm had done it just a few years previous. The original concept was called BITE (Business, Innovation, Technology, Efficiency) and was created for MHA Carpenter Box in 2015, in partnership with PF. Their first event had over 400 registrants and 350 attendees, over 30 exhibitors, and was a major success for such a large firm in the Brighton area.

With MHA Carpenter Box’s permission, we pursued the idea of a BITE event in northern England. The possibilities were limitless: but we had to be sure that Saint & Co were ready for the challenges. Having helped deliver this kind of event in the past, we knew what they were, and we had several conversations with the partners at Saint about it.

On 12 October 2018, over 150 business owners, Saint & Co team members, and exhibitors gathered at the Carlisle racecourse for an exceptional day of learning about how to use tech well in your business. The event was focused on Xero and the surrounding apps, and within moments of kick off we knew it would be a great success. The place was buzzing!

Want to know what took place behind the scenes?

First, we met with the Saint & Co partners and explained what the next six months would look like. The first step was a full scale custom event plan, so they would know all the marketing items involved. Prep included listing out all of the content & design items that needed to be worked on and sent out, as well as deciding on a project timeline and who was responsible for each item. The event plan was then divided into stages so we could focus on each part of the event individually.

With permission from MHA Carpenter Box, we adjusted the existing BITE logo using the Saint branded blues and kept the bold shark fin as the feature. We used the logo design as well as the hashtag, #bite2018, throughout the initial event page on the Saint site, on each page of the new Rocketspark website, across all the Saint social media platforms and on all digital and print media that went out, including custom imagery, emailers, printed invites, banners, t-shirts, goodie bags and swag.

Besides the logo, the team developed some design elements to fit the brand which were pulled throughout the website, and design items. These included the shark fin, the wave concept and the breakdown of the letters of BITE.

We looked at multiple venues but some were too outdated and others were too dark or not big enough. It was so important  that the venue matched the BITE message – modern, up-to-date and using the best in tech! The Carlisle Racecourse was the perfect setting for an event of this level. It has a spacious main room which suited the keynote talks and the exhibitors (and featured no fewer than 9 tv screens, helpful for viewing of slides). The smaller rooms were perfect for breakout sessions which were held after lunch. The venue is well known in Carlisle and is easily accessible….plus they serve a great tea! Before the event took place, Jane from Saint and someone from the PF team visited the venue to ensure it was exactly the right fit.

“The Racecourse is always a good venue. Easy to get to, parking good, comfortable and spacious!” – Jonathan Brown, attendee 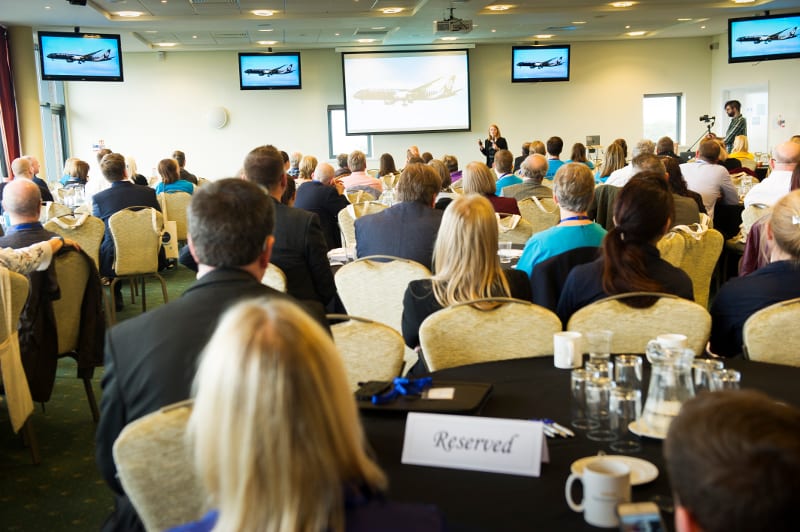 An info pack was created to let potential sponsors know why they couldn’t miss out on BITE 2018. It included the purpose and history of BITE, info about Saint & Co and the audience, the agenda, the keynote speakers and sponsor/exhibitor opportunities and costs. We also hosted a Q&A session which allowed the sponsors an opportunity to find out more about the event and how it would benefit them.

Sponsors were provided with a marketing pack which included event images, suggested social posts and email content, the event logo and hashtag and custom images with their logo. Training & support was included for those with speaking slots, and a designated website page was created for all premium sponsors.

“Having most of your staff there chatting to attendees was a lovely touch and I especially appreciated that there seemed to be no difference in how you treated non-clients on the day.” – Angela Roberts, attendee 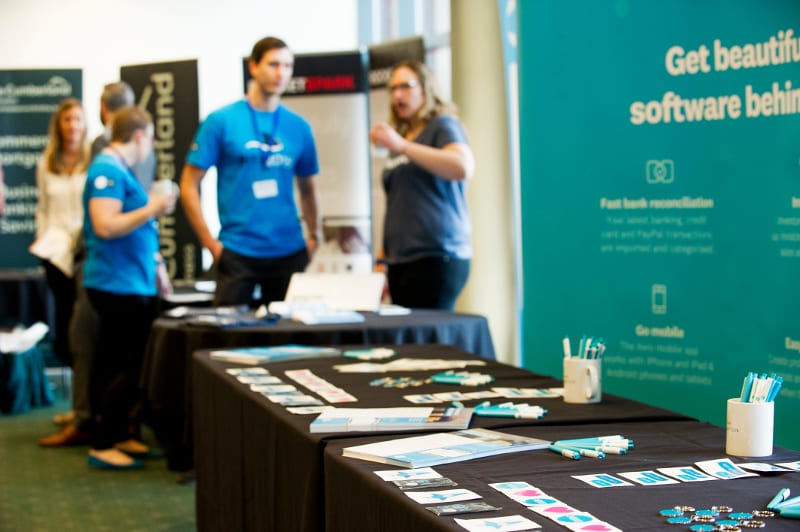 Finding the right speakers was very important as we wanted to ensure that it was an event that people would want to come to. Andrew Liddle from Saint & Co, suggested Andrew & Pete (comedic content marketing duo) as he heard them at Xerocon and really enjoyed their talk. Stuart Farrier suggested we have John Stevenson (MP Carlisle) do the opening and welcome because he spoke at local events and it was important to have a local speaker that people were familiar with.

Karen Reyburn from PF suggested Ashleigh Lambert from Xero because she saw her speak at various Xero roadshows and was impressed by her knowledge and speaking skill. It was also very important to include a female speaker on the day. Andrew Liddle offered to open the event (which seemed fitting) and he did so with energy and excitement for what was to come.

After the morning talks, the attendees had the choice to attend one of four breakout sessions, run by AutoEntry, iwoca, Rocketspark and Xero. Before the event, we spent time going over the talks with each speaker, ensuring that the content that was shared was both relevant and useful.

“Thank you for providing a breadth of high quality speakers for free” – Julia Cater, attendee

We started by creating a landing page for BITE 2018 on the Saint website, but once interest picked up, we realised the event needed its own platform to really stand out and get the attention it so deserved. We joined forces with Rocketspark (the creators of beautifully simple websites and one of the sponsors of BITE 2018) and worked together to build a custom website for the event, packed with information about the incredible speakers, sponsors and plenty of sharks! 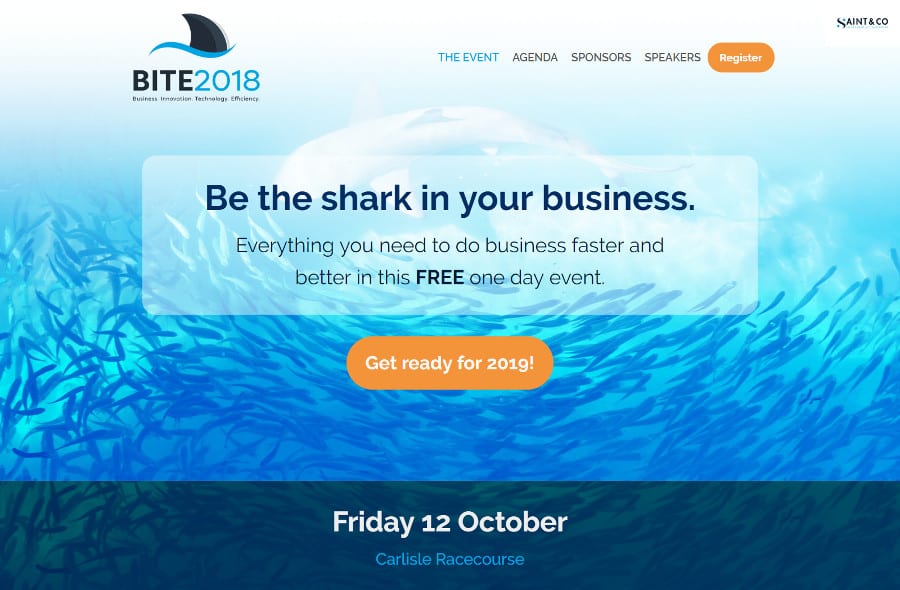 Although many people worked on the details behind the scenes throughout the process, at the start of the project, we explained to Saint & Co that they would need to have at least one person (but maybe multiple people) on hand to do the things related to the event, including communicating with speakers, arranging everything with the venue etc. The team at Saint understood this and identified Jane as the primary BITE contact.

We used Eventbrite to manage the registration of attendees and all communication with them prior to the event.

We met with the BITE team at Saint virtually at least once a month in order to keep on track with the project plan and we had a few additional meetings in-between with Jane. Karen from PF went to the Saint offices multiple times for planning and to prep the full Saint team as to their role before the event and on the day.

In order to reach anyone and everyone that we thought would benefit from BITE 2018, invitations were created in different forms. A beautifully designed postcard invite was mailed out to clients and prospects of Saint & Co. and a direct letter was sent out to various contacts. The team designed a BITE specific template in Mailchimp and a series of emailers were written up and sent out. It was important to the team at Saint that the event wasn’t just for their clients, but for anyone in Northern England that could benefit from the day. We therefore wrote a few blogs to try and attract any business owners who were keen to learn more about tech and wanted to move faster to benefit their business. 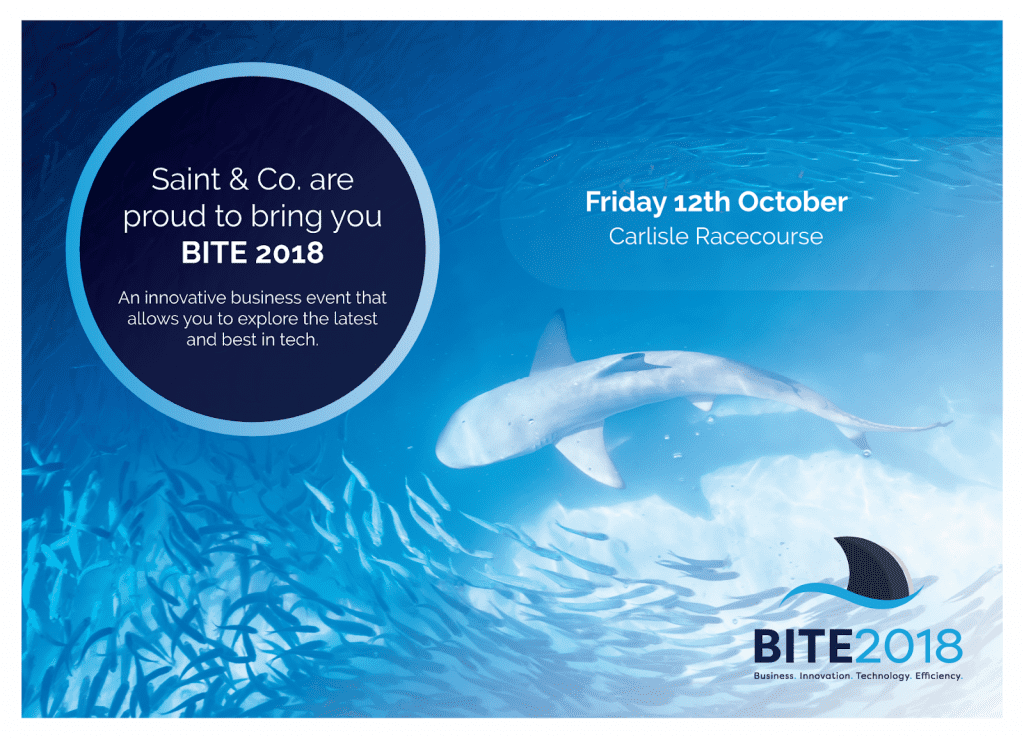 A number of BITE social images were created including some sponsor and speaker specific images. It’s so important to have custom images for an event like this so that everyone sees and remembers the brand.

We ran Facebook ads for 3 months before the event to build up some leads and add to the hype and we tested various audiences, advertising copy and images to see what attracted people the most. The results showed that we reached over 74,000 unique people across the UK and we generated 93 leads (people interested in attending the event).

The Saint & Co team, the PF team and all the speakers and sponsors were encouraged to post daily and share any posts that others did in order to make people aware of the event and get excited about attending.

Once we had a clear brand, it was easy to create the signage and swag items. With so many exciting types of swag available, we eventually settled on branded t-shirts for the Saint team, a BITE branded tablecloth and beautifully branded banners. Each attendee was given a BITE branded cotton shopper filled with a welcome book (which included the days’ agenda as well as info about the speakers and sponsors), and a Saint branded torch, bottle opener, notebook and pen. We had the idea to include a BITE branded shark soft toy but after getting quotes from suppliers, we found out that there was a 12 week waiting period for these to be shipped into the country! Our hearts are set on including these for BITE 2019 so we plan on ordering them well in advance next time! 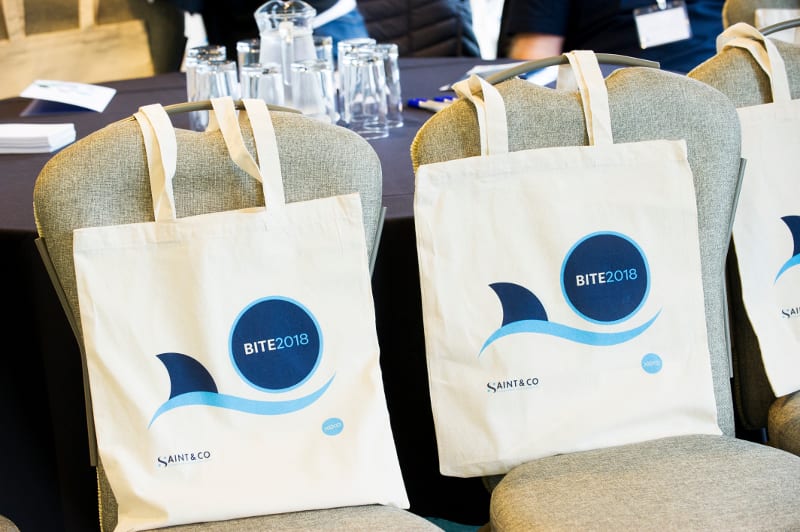 “Possibly the best event I have been to!” – Angela Roberts, attendee

The attendees arrived enthusiastic and ready to learn and the speakers were interesting and full of knowledge. Overall, we had wonderful feedback from everyone that attended and we are already working on a plan for BITE 2019!

Having previously spent about double on newspaper advertising for another event, with almost no return, the Saint team have realised that although BITE 2018 was a big investment and lots of effort, it was well worth every penny.

The Saint & Co team were aware that results from an event like this will trickle in over time and won’t appear instantly. For this reason, they have invested in plenty of follow ups for three months after the event as they understand that it’s not just about the event itself but also about the relationship that you build with each attendee thereafter.

Thinking of running an event yourself? With a good plan and a strong brand, you’ll be well on your way!

Best of all, this success have encouraged Saint & Co to run the event again – so look out for BITE 2019, where Saint & Co will bring their clients more cutting edge tech, even more app exhibitors, inspiring speakers and of course more ‘bite’!

Have a look at what Andrew Liddle had to say about the event and about The Profitable Firm:

The start of a new year usually involves setting #goals for the next year. Here's why the goals you set for your firm matter so much for your #marketing ✨👇 wearepf.com/personal-goals…