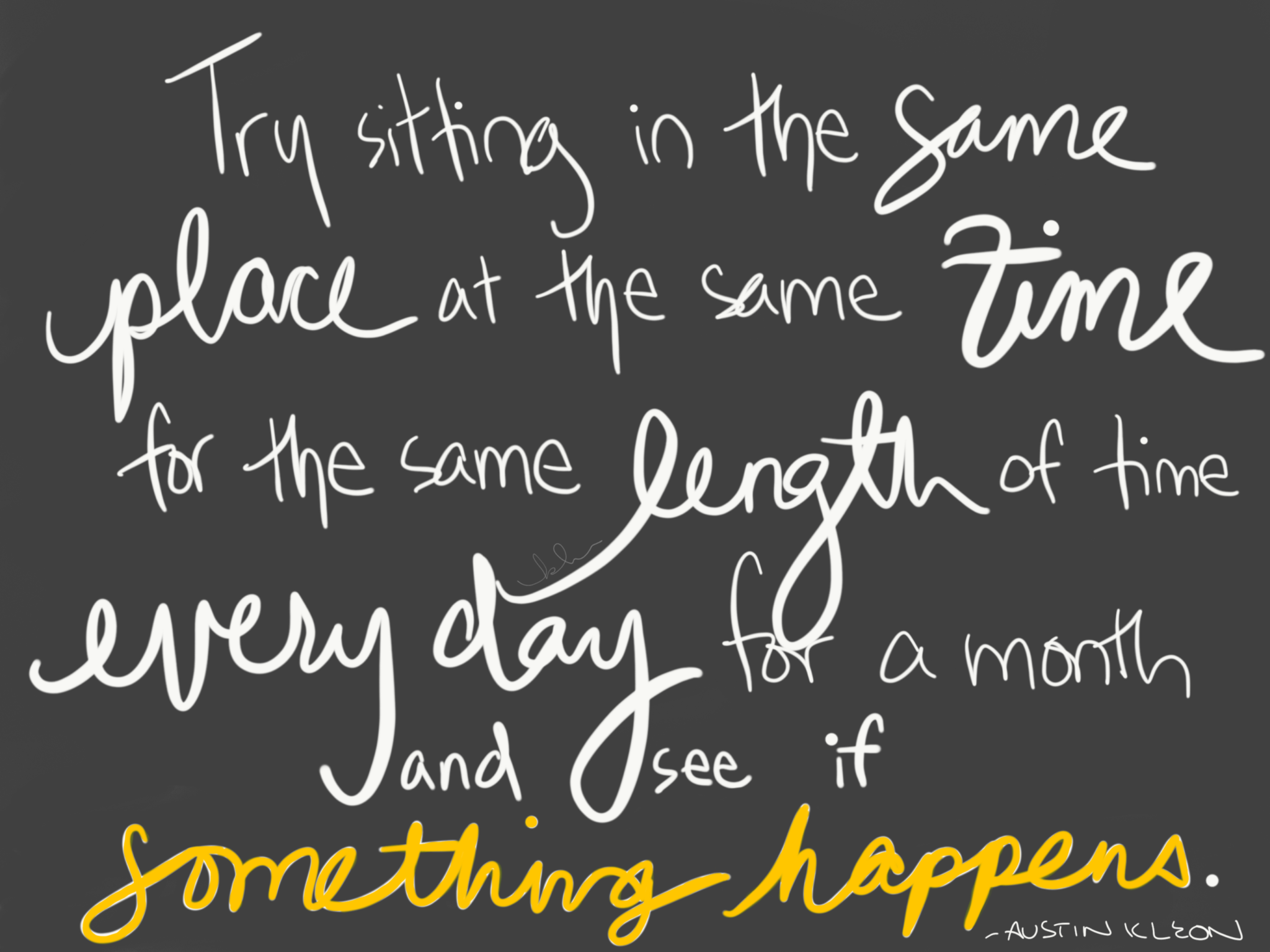 The most significant change happens in small increments, day after day. Month after month, year after year.

In the past 6 weeks, I’ve worked up to being able to do 50 situps and pushups every day, by starting with 10, and then adding one of each, every single day.

In this lockdown time, there’s hardly any sense of time. We forget what day it is, forget friends’ birthdays (or our own), can hardly tell the difference between a weekday and a weekend. The only day I really know are Sundays, because that’s the day I “go to church” on Facebook and I take a rest from work and exercise.

So I know the little increments, repeated daily, are the best way to achieve things.

But up until last week I hadn’t applied it to my business – not really.

There are things I do consistently. I write these Notes, my team write (and I review) the PF marketing tips that go out every Friday. I run an Accelerator group every week, and a Mastery group every two weeks. We do these things to help our clients, and we do help them, consistently over time.

But for the more major projects I want to get completed, I tend to work on them “as I have time”, which actually means “as I have motivation”.

This lockdown has shown me that, too. I have more time than ever, in some ways. I’m not traveling or driving or flying places. I’m not spending literal days at a time preparing for speaking engagements. I’m not going out with friends or having people round.

But motivation is tough – really tough, some days. We’re living with a weight of worldwide grief, and on top of that are the daily personal griefs – some major, like friends or family members who are sick or have died, and some minor, like trips we can’t go on or birthdays we can’t celebrate or restaurants we can’t visit.

And the only way to defeat the motivation drain is to pick one single thing we want to make progress on, and then break it down into task or time increments. And work on it every. single. day. For the same amount of time, even at the same time.

Last week I was reading a post by Austin Kleon, who is one of my favourite authors. His books are short and powerful and have been always so applicable to my life. And someone asked him, if you could summarise all of your books in one sentence, what would that be?

“Try sitting in the same place

at the same time

for the same length of time

and see if something happens.”

I loved just about everything from this. There’s so much that appeals to the creative in me (and we are all creative) as well as the me who wants to be ordered, disciplined, PRODUCTIVE. (Ugh, I’m equally so tired of people shouting about productivity and feeling the pressure of that, whilst also recognising it’s one of the driving forces of my life. Such an annoying driving force in some ways.)

He doesn’t make any guarantees.

He doesn’t say, if you do this, this will happen. (Cue those Linkedin posts or Facebook ads literally PROMISING you results if you follow their 7 step process and pay $97 or £997 or £19,997.)

He doesn’t say what to do, or how, or in what order.

He doesn’t even tell you how much time per day.

What’s fascinating is, I read that quote and suddenly thought, “He’s right. What if I took an hour per day on this one thing – how much progress could I make?”

And then I started. The next day, I started it. I decided my hour would be from 10am to 11am every day, and I would work on this one project I’ve been trying to finish for PF, and I started doing it. 10-11 every day.

It took me four days and repeating this quote to many, many different people to realise he never said HOW MUCH TIME.

He never said an hour.

He just said, the same amount of time every day.

Sit in the same place. Do the same thing. For the same amount of time – whether it’s 5 minutes or an hour or 4 hours or 8 hours.

But as soon as I read it, I knew what I could do. I knew an hour was possible. I’ve set up my diary so I don’t have meetings before 11am, because I’ve learned I need a few hours before meetings to get things done, review things the team are working on, do writing, prepare for sessions or meetings.

And I tend to start my working day at 9am. That’s when the team and our clients start, and especially now it’s good to have a particular time – or else time will run away with itself and it will be 11am before I know it.

So from 9-10am, I can work on the bits and pieces, the emails, the review work, the prep. And by 10am I’m ready to set it all aside, turn off all the notifications, turn on the timer on my watch, and start working on this particular project.

In this case, it’s a course we’re creating called the “DIY Content Marketer”. I’m summarising everything we’ve learned about content marketing for accountants – what works, what doesn’t, what to do and in what order – and sharing it in a “do it yourself” training course.

It was meant to be really simple. I’ve been running the course (now called the Accelerator) for five years. There are 12 sessions which run weekly, and I’ve run it 2-3 times per year – not to mention every speaking engagement, every webinar, every video we create is at its heart based on these concepts. So that means I’ve delivered probably these sessions probably 200+ times over the past five years…and it’s not really documented anywhere.

The course is all created at the back end of our website. Our designers spent a good bit of time last year crafting it and getting it set up and all it needed was for me to record twelve short videos.

You’d think I could get that done in a day.

I have Keynote presentations for each session, so I figured, piece of cake. I open up the presentations, note down bullet points from each, click record. Maybe one day, maybe two.

But I kept putting it off. I’d start to note the bullet points and think “am I covering everything? What if I’m missing something?”

I’d start pulling together the content and realise we have so much content, in so many places. Blog posts. Videos. Resources. Workbooks. Worksheets. Diagnostics.

It felt both simple and overwhelming, so I put it off.

But when I read that quote from Austin Kleon, I realised, it doesn’t have to be so overwhelming. He doesn’t promise me I’ll get the whole course finished in a month. Maybe I won’t. Maybe I’ll start it and realise it’s much bigger than that and it will take me a year.

But I know from experience I’ll make a whole lot more progress when I do the same thing in the same direction every day.

Last Friday, I started. I opened up the document, spent an hour on it (a little longer actually as it was a bank holiday), closed it. On Saturday, I did it again. Took a rest on Sunday. Then back to it on Monday. Tuesday. Wednesday. Thursday. Friday.

And it has turned into something much larger than just a list of bullet points. I’ve realised the reason I was putting this project off is because it literally summarises everything we know for accountants: and I want it to be done well. I want it to genuinely help them. I don’t just want to record a series of videos: I want to summarise the most important points, and then create a homework item for each session, so they can literally get going straight away. Get stuff done, themselves.

So within the past week, I’ve got a Google doc which has (at time of writing this Note) 22,995 words in it. I’ve got the core bones of each of the 12 sessions, with three bonus sessions that came out while I was writing. We’ve got a rough script for the Accelerator so the team can start delivering those courses too. I’ve got the start of a workbook which will go alongside the course so you can actually DO something with the knowledge. And once all the content for the sessions is done, I’ll go back, pick out the core bullet points, and use my hour a day to record those 10 minute videos. One video at a time. (I’ve learned a 10 minute video – of this kind, the lasting content kind – doesn’t take 10 minutes. I have to prep and record and re-record and review and re-record and export and review again and get captions and all that carry on.)

I confess I was sort of nervous to share this with you guys, because I have this weird superstitious feeling about telling people something new I’m doing. It’s like I do really great when I’ve decided myself about the new thing, and it’s like a little secret between me and me, and no one knows if I achieve it or don’t, succeed or not.

And then I tell people about it. And then Something Happens or it’s a really hard day or i lose momentum or I get bored (because everyone heaps praise on you and then it doesn’t feel urgent anymore)…and then the project never gets finished.

I’ve also learned from my other daily things that doing things secretly doesn’t work, either. Because if you hold back and say “I’ll just do it myself so if I fail no one will know about it”…well, no one will know about it. By sharing weekly updates on Insta about my weight loss, I realised I need support and encouragement and people with me on the long, rewarding, frustrating, discouraging, amazing, successful journey.

These Notes are similar. I write them every week, and at least half the time I get close to Saturday and think, “I have no idea what to say. Maybe I’ll just skip it this week.” But I do it anyway, and usually those are the weeks when I get the most replies, the most people saying “I hear you – me too – I’m in this with you”.

So that’s what I’m doing here too.

We have a waiting list for the DIY Content Marketer, and I’ll be honest, we’ve had that waiting list there for a while. I sort of feel bad for people who signed up on it last year and are still waiting.

It’s not done – it’s not anywhere near done. It seems to grow arms and legs every day and in some ways I have no idea what it’s going to be by the end of my month of one-hour focused work on it.

But there’s no guarantees about results in the quote. He just says, see what happens.

So that’s what I’m doing. I’m sitting in the same place, at the same time, for the same length of time, every day – and seeing what happens.

Get Karen’s Notes every Saturday

A few strange glitches on our website forms today. If you’re trying to sign up for something and it didn’t work, DM us and we will sort you out! We shall fix it soon. Another opportunity to get excited about our new website which is in the design phase....