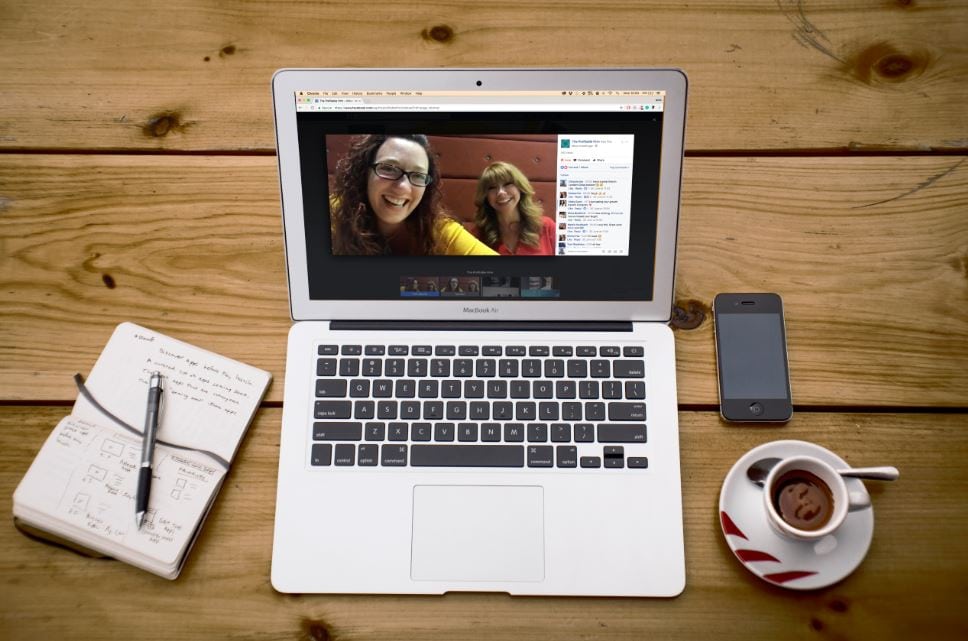 Last week we ran our first scheduled Facebook live session. We set the time, sent out emails, posted on social, and generally made a big deal out of the live session that was coming.

It went great – we had a good time, we made our big announcement, and we were pleased to see that many people engaged with us at the time as well as commenting later that they had caught the recording.

(If you missed the big announcement, we suggest you flick through the recording which you can view here.)

As with all marketing actions, though, things didn’t go perfectly. And there were lessons and learnings I took on board which will come in handy for our next Facebook Live – and yours, too.

(The same principles apply for any live video, whatever social platform you use)

Setting a specific time is mostly for you, not your audience

When you set a time for a webinar, the expectation is that it will start (and end) on the dot. But with Facebook, most of your live attendees are going to be people who simply happen to be on when you go live. It’s not the sort of thing people put in their diary and block out an hour for.

Partly this is because a Facebook live session tends to be as long or as short as you need to get the message across. If you say what you need to say in 10 minutes, you’re done. If you need 45 minutes and you’re still going with stories, you can do that too.

Think about your target audience

We set the specific time of 11am because that was when Jill and I (who were making the announcement) were free to do it. Jill is our new US Client Manager who is joining us in August – and she and I had met up in London to plot and plan amazing new marketing things for the entire PF Community, and especially our US clients and prospects.

Hilariously, we got two minutes into the announcement and Jill pointed out that most of the American and Canadian accountants and bookkeepers were very likely still asleep. A few on the East Coast might have been pouring their first cup of coffee at 6am, but I’m fairly confident that those in California and Arizona were definitely not joining us.

So here we had set up this amazing announcement which was particularly relevant to accountants in the States, and we ran it at a time when it was less likely they could join live.

It was a great lesson, because it reminded us of the importance of time zones (which is part of why we’re hiring Jill in the first place!), and second because it made for a good laugh. I got a text from one of my clients that weekend saying, “Brilliant FB video with you and Jill! Great to see you two having fun.”

Whatever mistake you make, roll with it.

We got about four minutes into the Facebook live session when the live feed stopped and we got the dreaded spinning circle. Facebook advised that the connection wasn’t strong, and asked if we wanted to try to reconnect.

There were two buttons, and one of them was ‘cancel’. Being used to the word cancel essentially meaning “no thanks, go back to where I was”, I clicked ‘cancel’, and…it cancelled our entire Facebook live session.

We had about 7 people viewing live at that time, so when it cancelled, it dropped all our viewers, and we had to set up a whole new one, and hope that our viewers would realise what happened and join us on the new live feed. (They did, which was really cool of them.)

I realised that although I had the wifi details I hadn’t connected to it, so we were running the live session on 4G, and it went fine for a few minutes but then couldn’t handle it (or possibly dropped to 3G).

So, we had to start over, which meant that instead of one video of our big announcement, we had one with the start of our announcement, and then another where we had to recap it and hope people caught it.

What’s great about marketing now is that people would far rather honesty, reality, and humour. We had a laugh, explained what happened, and carried on.

This is a great lesson not only for live videos but for everything you do in marketing. 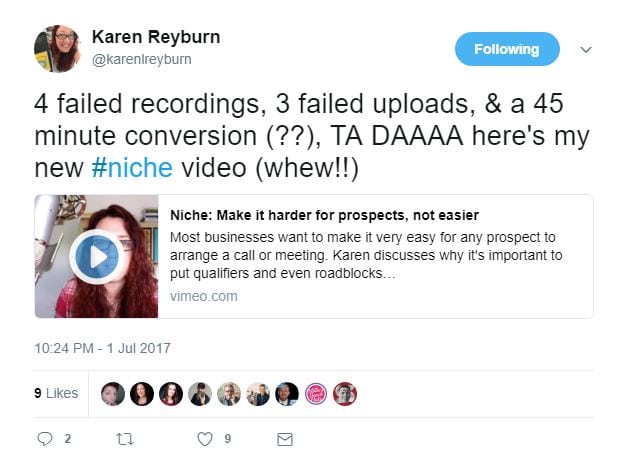 Whatever your mistake, roll with it. Explain what happened. Have a laugh. I often get more engagement from my mistakes and mix ups than i do from our perfectly executed marketing items. It’s not a reason to mess things up all the time: if you never get it right people might wonder what’s going on. But we all get it wrong from time to time and it encourages your audience that you, too, are human.

Don’t overthink it: go for it

I’ve spoken to so many accountants in the past few months who have told me that they are literally terrified to write blogs, record video, go live, run a webinar, deliver a presentation.

There is only one way to overcome that.

And you know what it is.

As accountants, you’re used to all the planning. To do lists, Trello boards, pre-meeting meetings, notes, phone calls, emails, Google docs…. you would rather spend ten hours preparing for something than five minutes actually doing it, because you’re worried it won’t be perfect.

You’ve got to simply start.

I fully support some planning. If you’re going to do a Facebook live, it would be good if you tested it out first. Made sure your tripod holds the phone without dropping it. Know what button to press and when. (Ahem…cancel button anyone??) Check the audio around you and whether you need a lapel mike.

But those things are very easy to do: and you’re going to learn the most by simply getting stuck in.

One of my fellow CMA members, Jon Norton of Barefoot Accounting, told me at the CMA Live event that he participated in a 90 day challenge to blog every week.

“I learned more by simply writing the blogs and posting them than from any other preparation or training I’ve ever done,” he said.

I still support advice and training – and I know Jon does too (that’s why he’s in CMA).

So whatever you are avoiding, start today. Give it a go. And let me know how you get on!

Oh – and enjoy our two live videos here – the fail and the win!

“No failure: only feedback.”

That was advice I was given many years ago when I was running the consultancy division of an accountancy firm. We were delivering a live seminar event, and it looked like we were only going to have 5 people (of the original 20 registrants) show up.

I was discouraged, and was considering cancelling the event. I decided not to, and later I was telling the story to a colleague, who agreed it was wise to carry on, and also to take learnings from that situation.

He pointed out that the event was not a failure, because 5 people did show up and got a lot out of it, and equally we now had more feedback from which to plan our next event.

That has stuck with me over the years, every time I do something new, or things don’t quite seem to work out as I thought they might for a particular marketing action.